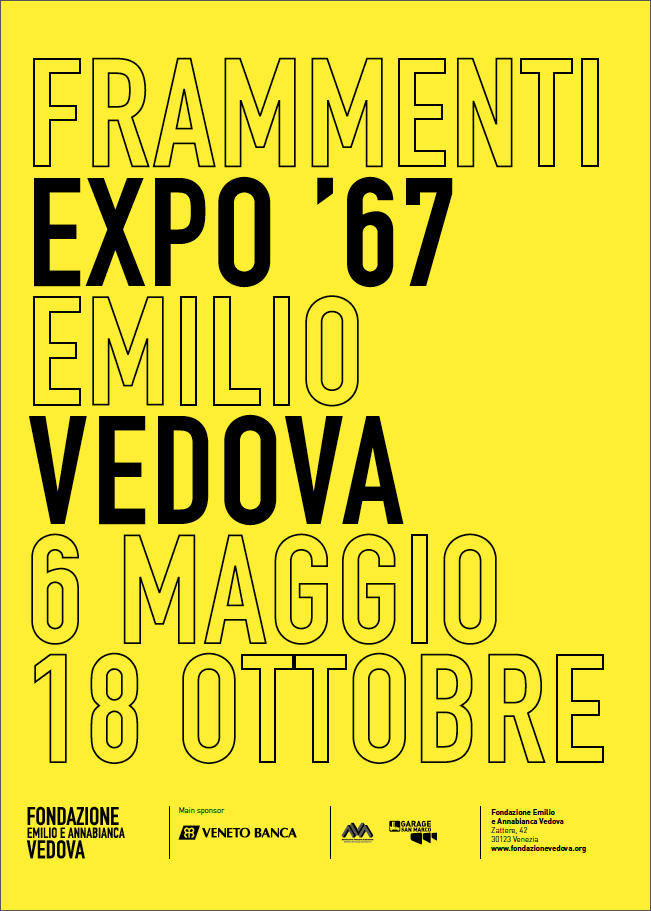 Trois disques (Man) / L’Homme
For the Expo, Calder was commissioned by the International Nickel Company of Canada (INCO) to make a monumental stabile sculpture, Trois disques (Man). The artist originally considered fabricating the sculpture from nickel in honor of its commissioner, but it proved technically impossible on the desired scale. Calder turned to his usual medium of steel, but for the first time in his career, he left the monumental work unpainted, underscoring its materiality.
Twenty-two metres high and made of 102 stainless steel sheets, almost a kilometer of steel band and 4000 steel bolts, the stabile was donated to the citizens of Montreal on May 7, 1967, the day of the 325th anniversary of the city’s foundation, and installed at the entrance to the Expo in Place de l’International Nickel, where the public arrived via subway to visit the event.

The exhibition
The exhibition, curated by Germano Celant and organized in collaboration with the Calder Foundation, New York, fills the Spazio Vedova with sculptures, a film, and photographs of Calder’s 1967 participation in the Montreal Expo.
The maquettes on display bear witness to Calder’s working methods. For his commissioned stabiles (immobile abstract sculptures), the artist would make small-scale models that, once confirmed for monumental enlargement by their patrons, were scaled up to an intermediate size (intermediate maquettes) for technical testing before being enlarged in full by one of the industrial ironworks that Calder employed. In the case of Trois disques, the work was fabricated at the Etablissements Biémont foundry in Tours, France, not far from Calder’s house in Saché in the Loire valley. The original maquette of Trois disques for the 1967 Expo is on display in Venice. The title was changed to Man/L’Homme in accordance with Expo’s theme. In order to provide a context for Calder’s sculpture, the exhibition is enriched with photographs by Ugo Mulas. In addition to various other sculptures and works on paper, the display includes a mobile—an example of Calder’s kinetic sculptures for which he is best known—in which equilibrium is dynamic, influenced by the currents of air and thus also by the presence of the public.